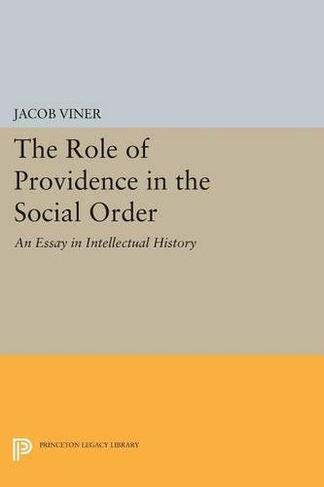 The Role of Providence in the Social Order: An Essay in Intellectual History (Princeton Legacy Library)

The essays in this book were originally presented by Professor Viner as the 1966 Jayne Lectures of the American Philosophical Society. The relationship between religious doctrines and economic theory and behavior had long interested Professor Viner, and the conclusions he discussed represented years of thoughtful study. They focus in particular on the way in which providence was used to justify existing economic and social conditions. The author points out that providence favors trade among peoples in order to promote universal brotherhood; providence also creates social inequality because it is part of the divine plan. Providence designed a world in which commerce was necessary, in which good business benefited not only the individual, but all mankind, in which inequality in rank and income was part of the scheme of things. Why, then, the evils of over-rigid mercantilism, or selfish profiteering, of undeserved and hopeless poverty? Professor Viner shows that in discussing such questions the Fathers of the Church, the scholastics, the theologians of the seventeenth century, and the philosophers of the eighteenth laid the foundations for modern economic thought. Originally published in 1977. The Princeton Legacy Library uses the latest print-on-demand technology to again make available previously out-of-print books from the distinguished backlist of Princeton University Press. These editions preserve the original texts of these important books while presenting them in durable paperback and hardcover editions. The goal of the Princeton Legacy Library is to vastly increase access to the rich scholarly heritage found in the thousands of books published by Princeton University Press since its founding in 1905.