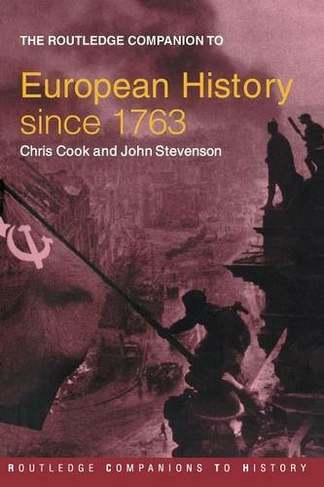 The Routledge Companion to Modern European History since 1763 is a compact and highly accessible work of reference covering the broad sweep of events from the last days of the ancient regime to the ending of the Cold War, and from the reshaping of Eastern Europe to the radical expansion of the European Union in 2004. Within the broad coverage of this outstanding volume, particular attention is given to subjects such as: the era of the Enlightened Despots the Revolutionary and Napoleonic era in France, and the revolutions of 1848 nationalism and imperialism, and the retreat from Empire the First World War, the rise of the European dictators, the coming of the Second World War, the Holocaust, and the post-war development of Europe the Cold War, the Soviet Union and its break up the protest and upheavals of the 1960s, as well as social issues such as the rise of the welfare state, and the changing place of women in society throughout the period. With a fully comprehensive glossary, a biographical section, a thorough bibliography and informative maps, this volume is the indispensable companion for all those who study modern European history. 14 Line drawings, black and white; 20 Tables, black and white

John Stevenson is Professor of History at Worcester College, Oxford. He is the editor of English Historical Documents, 1914-1957. Chris Cook is editor of the Pears Cyclopaedia.