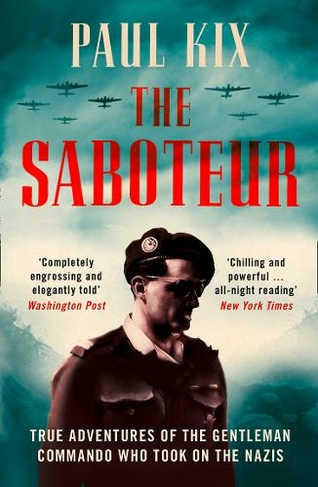 By Paul Kix (Author)
Paperback
https://www.whsmith.co.uk/products/the-saboteur-true-adventures-of-the-gentleman-commando-who-took-on-the/paul-kix/paperback/9780007553839-12-000.html £8.19 rrp £9.99 Save £1.80 (18%)
GBP
Availability
In Stock
Free Delivery Available When You Spend £25 Or More
Details
Spend £25 On Eligible Products To Receive Free Standard Delivery To You Home Or Free Next Working Day Click And Collect To Store
Share

In the tradition of `Agent Zigzag' comes a breathtaking biography of WWII's `Scarlet Pimpernel' as fast-paced and emotionally intuitive as the best spy thrillers. This celebrates unsung hero Robert de La Rochefoucauld, an aristocrat turned anti-Nazi saboteur, and his exploits as a British Special Operations Executive-trained resistant When the Nazis invaded France during the Second World War and imprisoned his father, Robert de La Rochefoucauld - a scion of one of the oldest aristocratic families in France - escaped to England and trained in the dark arts of anarchy and combat. Under the guidance of SOE spies, he learned to crack safes, plant bombs and kill enemies with his bare hands. Then, back in France, he organised Resistance cells, killed Nazi officers and interfered with German missions. He survived unbearable torture and escaped Nazi confinement on not one but two occasions, to live well into his eighties. The adventures of de La Rochefoucauld offer rare insight into a unique moment in history, revealing brand new information about a network of commandos who battled evil and bravely worked together to change the course of history.

Paul Kix is a senior editor at ESPN Magazine, and has written for numerous publications from the Boston Globe to the Wall Street Journal and The New Yorker.