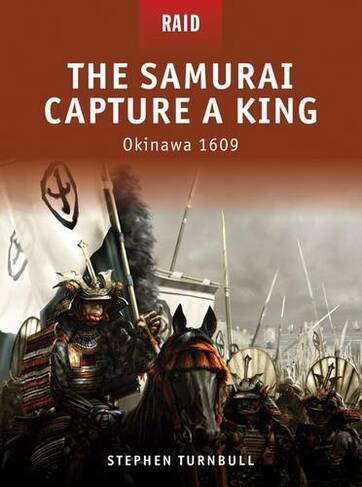 By Stephen Turnbull (Author), Mariusz Kozik (Illustrator), Richard Hook (Illustrator), Donato Spedaliere (Illustrator)
Paperback
https://www.whsmith.co.uk/products/the-samurai-capture-a-king--okinawa-1609-raid-no-6/stephen-turnbull/mariusz-kozik/paperback/9781846034428-01-000.html £12.87 rrp £13.99 Save £1.12 (8%)
GBP
Availability
Currently unavailable. We don't know when or if this item will be back in stock
Share

A brilliant but little-known operation, the Shimazu clan raid on the independent kingdom of Rykyu (modern Okinawa) in 1609 is one of the most extraordinary episodes in samurai history and the culmination of centuries of rivalry between the two powers. The defeat of the Shimazu at Sekigahara in 1600, and their need to win favour with the new Shogun, led them to hatch an audacious plot to attack the islands on the Shogun's behalf and bring back the king of Rykyu as a hostage. Stephen Turnbull gives a blow-by-blow account of the operation, from the daring Shimazu amphibious landing, to their rapid advance overland, and the tactical feigned retreat that saw the Shimazu defeat the Okinawan army and kidnap their king in spectacular fashion. With a detailed background and specially commissioned artwork, the scene is set for a dramatic retelling of this fascinating raid. Illustrations (some col.)

Stephen Turnbull took his first degree at Cambridge University, and received a PhD from Leeds University for his work on Japanese religious history. He has travelled extensively in Europe and the Far East and also runs a well-used picture library. His work has been recognised by the awarding of the Canon Prize of the British Association for Japanese Studies and a Japan Festival Literary Award. He currently divides his time between lecturing in Japanese Religion at the University of Leeds and writing. The author lives in Leeds, England.