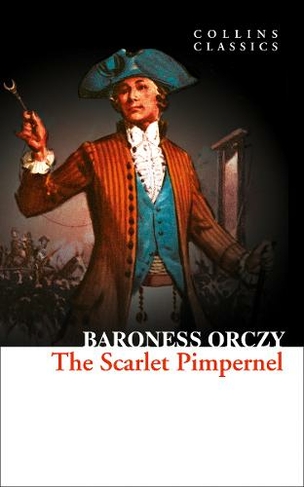 By Baroness Orczy (Author)
Paperback
https://www.whsmith.co.uk/products/the-scarlet-pimpernel/baroness-orczy/paperback/9780008278762-12-000.html £2.25 rrp £2.50 Save £0.25 (10%)
GBP
Availability
In Stock
Free Delivery Available When You Spend £25 Or More
Details
Spend £25 On Products To Receive Free Standard Delivery To Your Home Or Free Next Working Day Click And Collect To Store
Share

Also available on eBook for £1.88. Click here to purchase from Rakuten Kobo

HarperCollins is proud to present its incredible range of best-loved, essential classics. "Vaguely she began to wonder ... which of these worldly men round her was the mysterious 'Scarlet Pimpernel,' who held the threads of such daring plots, and the fate of valuable lives in his hands." In the early days of the bloody French Revolution, fleeing aristocrats are being captured and sent to the guillotine. But the mysterious Scarlet Pimpernel - along with his band of English gentlemen - is outwitting the revolutionaries. Known only by his calling card, he arrives in disguise and smuggles the nobles out of danger to the safety of England. But can he guard his true identity forever, or will he give his life for his cause?

Baroness Emma Orczy shot to fame when The Scarlet Pimpernel was performed as a play at London's New Theatre in 1905. Published in the same year, the novel marked the genesis of the masked-avenger genre, inspiring a host of other characters such as Zorro and Batman.