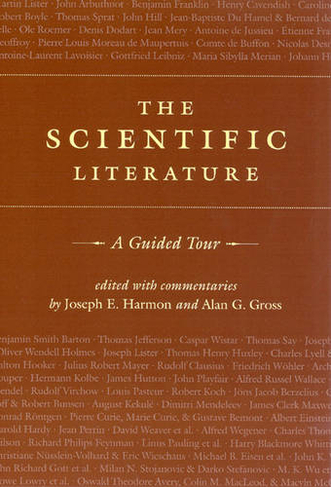 The scientific article has been a hallmark of the career of every important Western scientist since the seventeenth century. Yet its role in the history of science has not been fully explored. Joseph E. Harmon and Alan G. Gross remedy this oversight with "The Scientific Literature", a collection of writings - excerpts from scientific articles, letters, memoirs, proceedings, transactions, and magazines - that illustrates the origin of the scientific article in 1665 and its evolution over the next three and a half centuries. Featuring articles - as well as sixty tables and illustrations, tools vital to scientific communication - that represent the broad sweep of modern science, "The Scientific Literature" is a historical tour through both the rhetorical strategies that scientists employ to share their discoveries and the methods that scientists use to argue claims of new knowledge. Commentaries that explain each excerpt's scientific and historical context and analyze its communication strategy accompany each entry. A unique anthology, "The Scientific Literature" will allow both the scholar and the general reader to experience firsthand the development of modern science. 31 halftones, 27 line drawings

Joseph E. Harmon is senior technical communicator at Argonne National Laboratory. Alan G. Gross is professor in the Department of Rhetoric at the University of Minnesota. Together, they coauthored Communicating Science: The Scientific Article from the 17th Century to the Present.