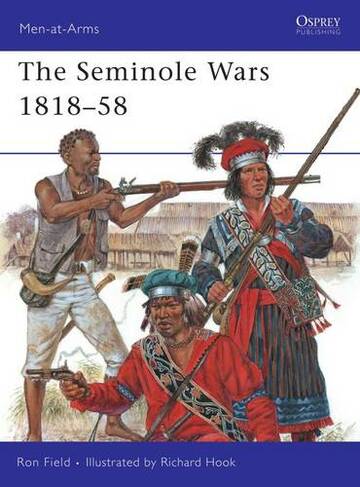 By Ron Field (Author), Richard Hook (Illustrator)
Paperback
https://www.whsmith.co.uk/products/the-seminole-wars-181858-menatarms-no-454/ron-field/richard-hook/paperback/9781846034619-01-000.html N/A
GBP
Availability
Currently unavailable. We don't know when or if this item will be back in stock
Free Saver Delivery on orders over £20
Details
FREE SHIPPING over £20 for Saver Delivery
Share

The Seminole of Florida were one of five so-called 'Civilized Tribes' who for many years lived in peace with the settlers. However, by 1815, frontier Americans had grown increasingly envious of their relative wealth and land, and resentful of their harbouring of former slaves. This book reveals the dramatic stories behind the ensuing Seminole wars, examining the dogged resistance displayed by the Seminole as they endured three drawn-out campaigns. Illustrated with careful reconstructions of the colourful and varied clothing and uniforms worn by both sides, the author discusses the organization and history of a tribe that refused to give in, until the sheer weight of the opposing forces ultimately led to their defeat. Illustrations (some col.)

Until his retirement in 2007, Ron Field was Head of History at the Cotswold School in Bourton-on-the-Water. He was awarded a Fulbright Scholarship in 1982 and taught history at Piedmont High School in California from 1982 to 1983. He was associate editor of the Confederate Historical Society of Great Britain, from 1983 to 1992. He is an internationally acknowledged expert on US military history, and was elected a Fellow of the Company of Military Historians, based in Washington, DC, in 2005.