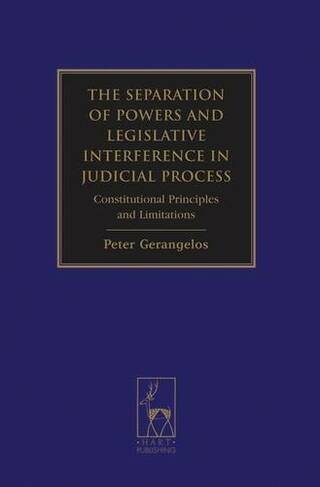 The Separation of Powers and Legislative Interference in Judicial Process: Constitutional Principles and Limitations

This book examines the constitutional principles governing the relationship between legislatures and courts at that critical crossroads of their power where legislatures may seek to intervene in the judicial process, or to interfere with judicial functions, to secure outcomes consistent with their policy objectives or interests. Cases of high political moment are usually involved, where the temptation, indeed political imperative, for legislatures to intervene can be overwhelming. Although the methods of intervention are various, ranging from the direct and egregious to the subtle and imperceptible, unbridled legislative power in this regard has been a continuing concern in all common law jurisdictions. Prominent examples include direct legislative interference in pending cases, usurpation of judicial power by legislatures, limitations on the jurisdiction of courts, strategic amendments to law applicable to cases pending appeal, and attempts directly to overturn court decisions in particular cases. Because the doctrine of the separation of powers, as an entrenched constitutional rule, is a major source of principle, the book will examine in detail the jurisprudence of the United States and Australia in particular. These jurisdictions have identical constitutional provisions entrenching that doctrine as well as the most developed jurisprudence on this point. The legal position in the United Kingdom, which does not have an entrenched separation of powers doctrine, will be examined as a counterpoint. Other relevant jurisdictions (such as Canada, Ireland and India) are also examined in the context of particular principles, particularly when their respective jurisprudence is rather more developed on discrete points. The book examines how the relevant constitutional principles strive to maintain the primacy of the law-making role of the legislature in a representative democracy and yet afford the decisional independence of the judiciary that degree of protection essential to protect it from the legislature's 'impetuous vortex', to borrow the words of James Madison from The Federalist (No 48). black & white illustrations

Dr Peter A Gerangelos is the Associate Dean (Undergraduate Studies) and Senior Lecturer in Law at the Faculty of Law, University of Sydney, Australia. He was previously Principal Solicitor in the Office of the Australian Government Solicitor.