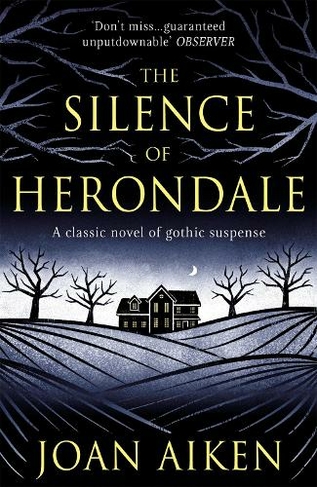 The Silence of Herondale: (Murder Room)

A child in danger, an isolated house in the depths of winter - and a killer on the loose... 'Don't miss ... guaranteed unputdownable' Observer Snow-covered fields and moors stretch away on all sides of Herondale House. Despite rumours of an escaped killer on the run, Deborah Lindsay knows that she must control her fear - she has a young charge, 13-year-old prodigy Carreen, to care for. But the isolated Yorkshire farmhouse already holds the terrible secret of one death - and after an increasing number of sinister 'accidents', Deborah begins to wonder how long it will be before evil strikes again... 'A splendidly romantic first thriller' Times Literary Supplement

Joan Aiken, English-born daughter of American poet Conrad Aiken, began her writing career in the 1950s. Working for Argosy magazine as a copy editor but also as the anonymous author of articles and stories to fill up their pages, she was adept at inventing a wealth of characters and fantastic situations, and went on to produce hundreds of stories for Good Housekeeping, Vogue, Vanity Fair and many other magazines. Some of those early stories became novels, such as The Silence of Herondale, first published fifty years ago in 1964. Although her first agent famously told her to stick to short stories, saying she would never be able to sustain a full-length novel, Joan Aiken went on to win the Guardian Children's Fiction Prize for The Whispering Mountain, and the Edgar Alan Poe award for her adult novel Night Fall. Her best known children's novel, The Wolves of Willoughby Chase, was acclaimed by Time magazine as 'a genuine small masterpiece'. In 1999 she was awarded an MBE for her services to children's literature, and although best known as a children's writer, Joan Aiken wrote many adult novels, both modern and historical, with her trademark wit and verve. Many have a similar gothic flavour to her children's writing, and were much admired by readers and critics alike. As she said 'The only difference I can see is that children's books have happier endings than those for adults.' You have been warned . . .