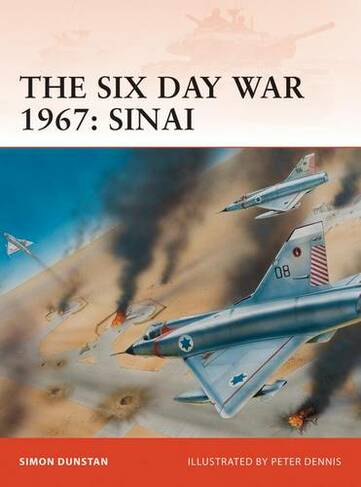 In May 1967, Egypt expelled the United Nations peacekeeping forces stationed in the Sinai desert and deployed its army along its border with Israel, its moves coordinated with those of Jordan and Syria. By June, Israel realized that the international community would not act, and so it launched a pre-emptive strike against the combined Arab forces. The ensuing Six Day War was a crushing defeat for the Arab world, one that tripled the area controlled by Israel and which sowed the seeds for the Yom Kippur War of 1973 and the continuing strife in the region. Written by the author of "Osprey's Yom Kippur War", this volume covers the background to the war and the campaign against the Egyptians in the Sinai Peninsula, including the initial devastating air assault that showed the world how vital air supremacy was in modern combat. Illustrations (some col.)

Simon Dunstan is a well-established author, film-maker and photographer in the field of military history, with several titles already published with Osprey. He specializes in armored warfare, and has written on this subject for two decades. His books have covered topics such as helicopter and armored warfare in Vietnam, the Challenger main battle tank, the British Guards and armored warfare in Korea. Simon lives and works in London. The author lives in London, England.