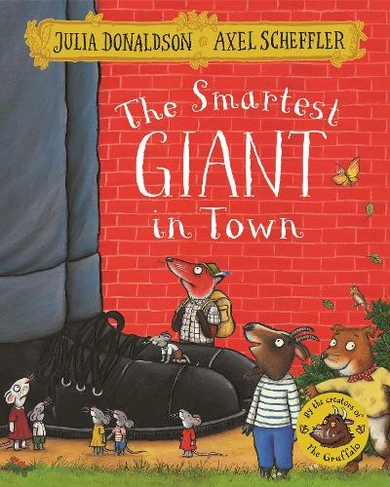 The Smartest Giant in Town

By Julia Donaldson (Author), Axel Scheffler (Illustrator)
Paperback
The Smartest Giant in Town is rated 5.0 out of 5 by 1.
https://www.whsmith.co.uk/products/the-smartest-giant-in-town/julia-donaldson/axel-scheffler/paperback/9781509812530-12-000.html £5.94 rrp £6.99 Save £1.05 (15%)
GBP
Availability
In Stock
Free Delivery Available When You Spend £25 Or More
Details
Spend £25 On Eligible Products To Receive Free Standard Delivery To You Home Or Free Next Working Day Click And Collect To Store
Share

Meet a very helpful giant in this funny, big-hearted tale from the unparalleled picture book partnership of Julia Donaldson and Axel Scheffler, creators of The Gruffalo. George wished he wasn't the scruffiest giant in town. So when he sees a new shop selling giant-sized clothes, he decides it's time for a new look: smart trousers, smart shirt, stripy tie, shiny shoes. Now he's the smartest giant in town . . . until he bumps into some animals who desperately need his help - and his clothes! This edition features the classic story with a stunning redesigned cover and beautiful finish, making it a must-have addition to the bookshelves of all Donaldson and Scheffler fans - big and small! Also available with redesigned covers are: The Gruffalo, The Gruffalo's Child, Room on the Broom, The Snail and the Whale, Monkey Puzzle, Charlie Cook's Favourite Book, and A Squash and a Squeeze.