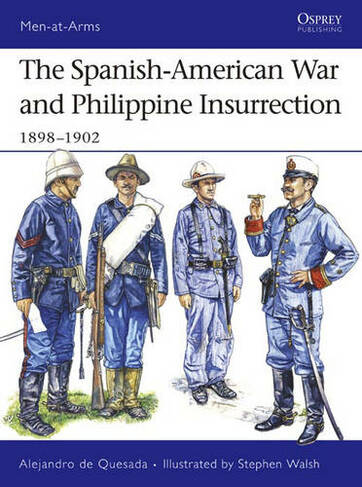 By Alejandro De Quesada (Author), Stephen Walsh (Illustrator)
Paperback
https://www.whsmith.co.uk/products/the-spanishamerican-war-and-philippine-insurrection-18981902-menatarms-no-437/alejandro-de-quesada/stephen-walsh/paperback/9781846031243-01-000.html N/A
GBP
Availability
Currently unavailable. We don't know when or if this item will be back in stock
Free Saver Delivery on orders over £20
Details
FREE SHIPPING over £20 for Saver Delivery
Share

In 1898, US public opinion turned against the Spanish for their repression of Cuba. Relations between the two governments soured and ultimately resulted in the mysterious blowing up of the USS Maine in Havana harbour, which triggered a short but demanding war. Many famous US personalities were involved, including future President Theodore Roosevelt, future general John Pershing, and journalists William Randolph Hearst and Stephen Crane. The war against the Spanish may have been brief but as Henry Cabot Lodge declared: 'Its results were startling, and of world-wide meaning.' Victory made the US a nation with global interests. Providing a detailed examination of the experiences and equipment of the opposing sides, and featuring rare and previously unpublished photographs, this book highlights this crucial yet oft-forgotten war that changed the future of American foreign policy during 'the age of American imperialism.' Illustrations (some col.)