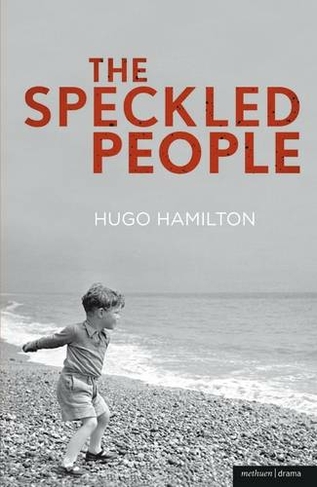 Adapted for the stage from the best-selling memoir, The Speckled People tells a profoundly moving story of a young boy trapped in a language war. Set in 1950s Ireland, this is a gripping, poignant, and at times very funny family drama of homesickness, control and identity. As a young boy, Hugo Hamilton struggles with what it means to be speckled, "half and half... Irish on top and German below." An idealistic Irish father enforces his cultural crusade by forbidding his son to speak English while his German mother tries to rescue him with her warm-hearted humour and uplifting industry. The boy must free himself from his father and from bullies on the street who persecute him with taunts of Nazism. Above all he must free himself from history and from the terrible secrets of his mother and father before he can find a place where he belongs. Surrounded by fear, guilt, and frequently comic cultural entanglements, Hugo tries to understand the differences between Irish history and German history and to turn the strange logic of what he is told into truth. It is a journey that ends in liberation but not before the long-buried secrets at the back of the parents' wardrobe have been laid bare.

Hugo Hamilton was born and grew up in Dublin. He is the author of five highly acclaimed novels: Surrogate City, The Last Shot and The Love Test; Headbanger and Sad Bastard and one collection of short stories. He has worked as a writer-in-residence at many leading universities, including most recently at Trinity College, Dublin.