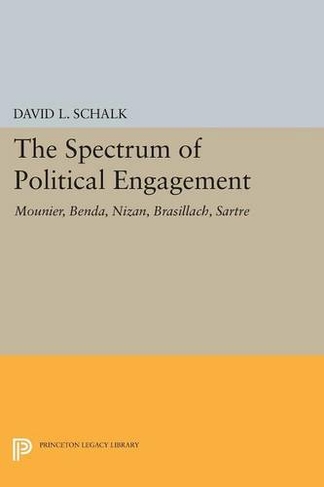 Why do artists, poets, philosophers, writers, and others who are usually classified as intellectuals leave the ivory tower to "dirty their hands" in the political arena? In an effort to illuminate the intellectual's struggle to come to grips with the issues raised by political involvement, David Schalk examines the life and thought of five intellectuels engages in France during the period between 1920 and 1945. From communist to fascist, these figures--Paul Nizan, Jean-Paul Sartre, Emmanuel Mounier, Julien Benda, and Robert Brasillach--cover the full political spectrum, and Professor Schalk studies their diverse reactions to the social, political, and economic tensions of the interwar period. Broadly defining "engagement" as political involvement that is voluntary, conscious, and freely chosen, usually by intellectuals, the author poses the intellectual's dilemma in the following terms: "When we are engage," he writes, "we fear that we are debasing our highest values; when we are not, we worry that we have become, in Paul Nizan's trenchant phrase, mere chiens de garde [watchdogs]." He then investigates the origins and the popularization of the concept of engagement in the early 1930s, the arguments used to denounce it and to defend it, its different manifestations, and finally its effects on the socio-political actuality of the world. Originally published in 1979. The Princeton Legacy Library uses the latest print-on-demand technology to again make available previously out-of-print books from the distinguished backlist of Princeton University Press. These editions preserve the original texts of these important books while presenting them in durable paperback and hardcover editions. The goal of the Princeton Legacy Library is to vastly increase access to the rich scholarly heritage found in the thousands of books published by Princeton University Press since its founding in 1905.