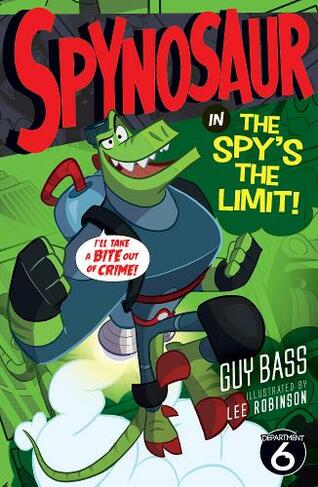 The Spy's the Limit: (Spynosaur 3)

From a land before time comes a hero for today ... Spynosaur - he's going to make crime extinct! A hilarious new series from award-winning author Guy Bass, perfect for fans of MY BROTHER IS A SUPERHERO, THE ASTOUNDING BROCCOLI BOY, DARKMOUTH and HAMISH AND THE WORLDSTOPPERS. Spynosaur, the world's only dinosaur spy, and his sidekick Amber race to investigate a distress beacon emanating from the Arctic Circle - the last location of Spynosaur's long-lost father, super-spy Abner Gambit. They trace the beacon to an underground hideout, where they are met by an army of mecha penguins ... and rescued by Spynosaur's dad, who has been accidentally frozen in ice for the last thirty years. Father and son team up to complete Abner's unfinished mission - to track down enemy agent The Purple Spyder, who's in possession of the P.L.O.T. Device, a machine that can predict spies of the future. The race is on to find the device, but with very different approaches to spying, can Spynosaur and his dad put aside their differences long enough to save the day ... and the future? CPSIA choking hazard - No choking hazard warning necessary EU Toy Safety Directive - No warning

Guy Bass is an award-winning author who has written more than 30 books, including the best-selling STITCH HEAD series, DINKIN DINGS, SPYNOSAUR and SKELETON KEYS. He lives in London with his wife. Find out more at guybass.com | @GuyBassBooks Lee Robinson is a comic book artist and illustrator whose work includes the KUNG FU PANDA graphic novels. He lives and works in Newcastle.