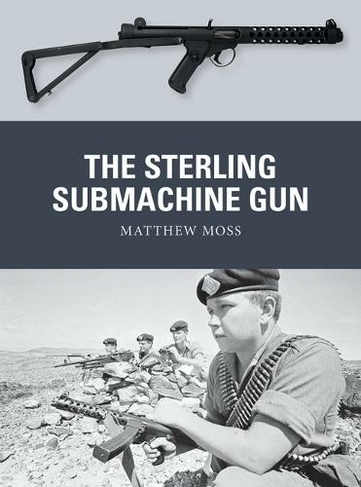 Designed by a motorcycle racer turned small-arms engineer, George Patchett, the submachine gun that eventually became known as the Sterling was developed during World War II. Some suggest it first saw action during Operation Infatuate with No. 4 Commando, before becoming fully adopted by the British Army in 1953 as the Sterling Machine Carbine (L2A1). It was centre stage for many of Britain's post-colonial conflicts from Malaya to Kenya and from Yemen to Northern Ireland. The silenced L34A1 Sterling-Patchett entered service in 1966 and first saw action deep in the jungles of Vietnam in the hands of the elite special forces of Australia, New Zealand and the United States during prisoner snatches and reconnaissance patrols. Employing first-hand accounts and painstaking technical analysis, this engaging account features carefully selected archive photography and specially commissioned colour artwork depicting the submachine gun that armed British and other forces for nearly 60 years.

Matthew Moss runs the website Historical Firearms and has contributed to a number of print and online publications including magazines such as History of War and Classic Arms & Militaria. This is his first book. He lives in Lancashire, UK.Adam Hook studied graphic design, and began his work as an illustrator in 1983. He specializes in detailed historical reconstructions, and has illustrated Osprey titles on subjects as diverse as the Aztecs, the Ancient Greeks, Roman battle tactics, several 19th-century American subjects, the modern Chinese Army, and a number of books in the Fortress series. His work features in exhibitions and publications throughout the world.Born in Malaya in 1949, Alan Gilliland spent 18 years as the graphics editor of the Daily Telegraph, winning 19 awards in that time. He now writes, illustrates and publishes fiction (www.ravensquill.com), as well as illustrating for a variety of publishers (alangillilandillustration.blogspot.com).