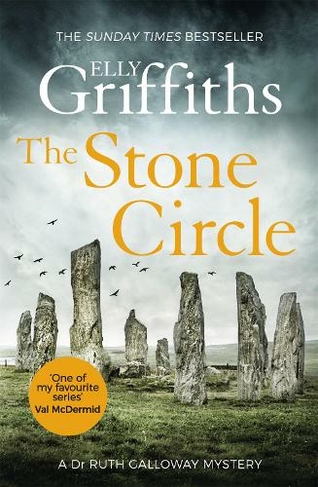 By Elly Griffiths (Author)
Paperback
£7.37 rrp £8.99 Save £1.62 (18%)
GBP
Availability
In Stock
Free Delivery Available When You Spend £15 Or More
Details
Spend £15 On Products To Receive Free Standard Delivery To Your Home Or Free Next Day Click and Collect To Stores

'My favourite series' Val McDermid DCI Nelson has been receiving threatening letters telling him to 'go to the stone circle and rescue the innocent who is buried there'. He is shaken, not only because children are very much on his mind, with Michelle's baby due to be born, but because although the letters are anonymous, they are somehow familiar. They read like the letters that first drew him into the case of The Crossing Places, and to Ruth. But the author of those letters is dead. Or are they? Meanwhile Ruth is working on a dig in the Saltmarsh - another henge, known by the archaeologists as the stone circle - trying not to think about the baby. Then bones are found on the site, and identified as those of Margaret Lacey, a twelve-year-old girl who disappeared thirty years ago. As the Margaret Lacey case progresses, more and more aspects of it begin to hark back to that first case of The Crossing Places, and to Scarlett Henderson, the girl Nelson couldn't save. The past is reaching out for Ruth and Nelson, and its grip is deadly.

Elly Griffiths was born in London. She worked in publishing before becoming a full-time writer. Her bestselling series of Dr Ruth Galloway novels, featuring a forensic archaeologist, are set in Norfolk. The series has won the CWA Dagger in the Library, and has been shortlisted three times for the Theakston's Old Peculier Crime Novel of the Year. Her Brighton-based mystery series is set in the 1950s and 1960s. Elly has also written a standalone mystery, The Stranger Diaries, which was a Richard & Judy bestseller and won America's most coveted accolade for crime fiction, the Edgar Award. Elly lives near Brighton with her husband, an archaeologist, and their cat, Gus.