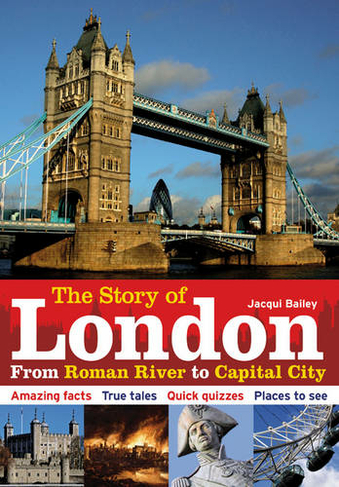 The story of a tiny settlement that grew up on a muddy river bank 2000 years ago to become one of the world's greatest capital cities. Fully revised and updated for 2011, The Story of London features the famous people and dramatic events - battles, plagues, fires and bombings - that have shaped the city, as well as the upcoming 2012 Olympic Games. Also included are introductions to the most important social and cultural institutions that influence Londoners' lives. Facts, fun quizzes and cartoons are presented in such a way as to bring famous events to life and cut-away drawings reveal London's greatest and best-known buildings, such as the Tower of London, Houses of Parliament and St Paul's Cathedral. Colour illustrations/photographs

Jacqui Bailey has spent a lot of her adult lifeworking with children's books. She has been an editor and publisher ofeverything from picture books to encyclopedias, but mostly enjoys finding outamazing bits of information and then writing about them. She is an award-winning author with more than 20 children'sinformation books to her name, including A Cartoon History of the Earthseries. Jacqui lives in London - and thinks it is the bestcity in the world.