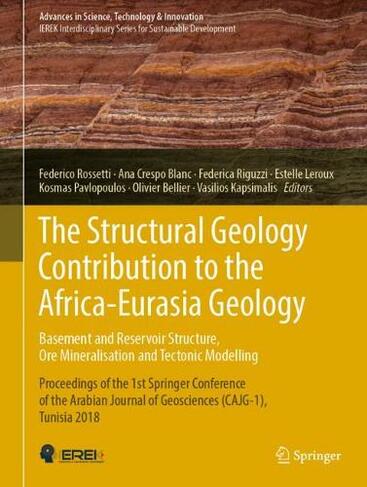 The Structural Geology Contribution to the Africa-Eurasia Geology: Basement and Reservoir Structure, Ore Mineralisation and Tectonic Modelling Proceedings of the 1st Springer Conference of the Arabian Journal of Geosciences (CAJG-1), Tunisia 2018 1st ed. 2019

This edited volume is based on the best papers accepted for presentation during the 1st Springer Conference of the Arabian Journal of Geosciences (CAJG-1), Tunisia 2018. The book is of interest to all researchers in the fields of Structural Geology, Stratigraphy, Ore Deposits, Regional Tectonics and Tectonic Modelling. This volume offers an overview of multidisciplinary studies on the broader Africa-Eurasia geology. Main topics include: 1. Basement Geology2. Fluid-rock interaction, hydrothermalism and ore deposits3. Reservoir geology, structure and stratigraphy4. Mediterranean Tectonics5. The Alpine-Himalayan convergence zone6. Tectonic Modelling 20 Tables, color; 209 Illustrations, color; 16 Illustrations, black and white; XXXII, 340 p. 225 illus., 209 illus. in color.

Ana Crespo Blanc, born in Switzerland, is Full Professor of Geodynamics at the University of Granada (Spain) since 1993. She has been the President of the Geological Society of Spain between 2008 and 2012. Her research focuses mainly on structural and kinematic analysis, relationships between deformation and metamorphism, isotopic geochemistry, marine geology and analogue modelling. She applied these different methodologies to the knowledge of the tectonic evolution of key areas of the Hercynian chain of Iberia, the Alps, the Himalaya or the Nankay Trough. Since the nineties, her research is mainly centered on the Mediterranean region, in particular the Betic-Rif orogen around the Gibraltar Arc. She is particularly interested in the architecture and the strain partitioning of such an arcuate orogen. Presently, she is interested in kinematic reconstructions of the Western Mediterranean, for which she characterized with her research group the different deformation events that affected the whole area. At the same time, she is involved in significant outreach activities concerning research in earth sciences.Kosmas Pavlopoulos (KP) was born in Athens, Greece. He received his B.Sc. in Geology and Ph.D. in Environmental Geomorphology from the University of Athens, Greece in 1986 and 1992, respectively. Since 2013, KP is Professor of environmental geomorphology in Geography and Planning Department at the University of Paris-Sorbonne Abu Dhabi. His previous appointments have been in Geography Department at the Harokopio University, Athens, Greece since 1999. He was chair of the working group on geoarcheology of IAG from 2009 to 2017 and member of the Scientific Committee of the French Archaeological School in Athens from 2010 to 2017. From 2017 is member of the Executive Committee of IAG (International Association of Geomorphologists) as Publishing Editor. Recognized specialist in the field of coastal geomorphology, sedimentology, Quaternary geology, seal level changes. His research focuses on the sediments depositional environments on arid and semi-arid areas, geomorphological evolution of marginal landscapes, on the sea level changes, on the hydrogeology and the wadi dynamic, on water resources management and on natural hazards, in the Mediterranean and in the Middle East.He has participated in 62 research projects, in 20 of which as coordinator. He has more than 140 publications in peer-reviewed scientific journals (68 currently shown in Scopus) and his work received more than 677 citations (h-index = 16, co-authors 141, source Scopus) and (156 currently shown in Research Gate), 1181 citations (h-index = 30.88, source Research Gate). KP has been a supervisor in 9 PhD and as member of the supervising committee of 12 PhD students. He is member, as an expert in Geosciences and environment, for the evaluation of research projects launched by the Greek Ministry of Research since 2000, by the French institute of CNRS 2004-2007 (ECLIPSE program), by French ministry of Education and Research from 2012-2013 (ANR project), by the MIUR (the Italian Ministry for Education, University and Research) 2015-2016 (Reprise project) and by the Ford Motor Company in 2016 (Conservation and Environmental Grants). Federica Riguzzi, degree in Physics and PhD in Earth Sciences at the University of Rome La Sapienza. Senior Researcher at Istituto Nazionale di Geofisica e Vulcanologia, Rome Italy. Her research activity is mainly focused on geodetic methods applied to geophysics; it concerns both methodological and applied studies devoted to the realization and measurement of crustal deformation control and to fundamental Physics experiment networks; time series analysis of GPS observations to study the deformation fields and seismotectonic processes; use of historical information and recent seismic data applied to seismic risk areas. The geodetic methodologies have been applied to geophysical studies in different regions and with various aims. Her contributions