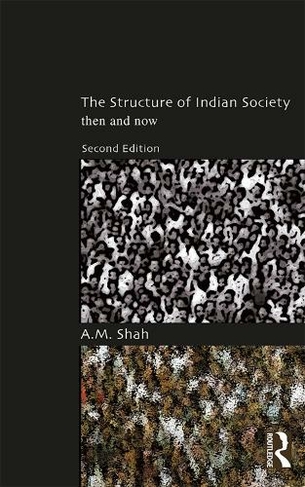 The Structure of Indian Society: Then and Now (2nd New edition)

This book explores the structural features of Indian society, such as caste, tribe, sect, rural-urban relations, sanskritization and untouchability. Based on a wealth of field research as well as archival material, the book Interrogates the prevailing thinking in Indian sociology on these structures; Studies Indian society from contemporary as well as historical perspectives; Analyses caste divisions vis-a-vis caste hierarchy; Critically examines the public policies regarding caste-less society, reservations for Backward Classes, and the caste census. This second edition, with four new chapters, will be a key text for students and scholars of sociology, social anthropology, political science, modern history, development studies and South Asian studies.

A.M. Shah is former Professor of Sociology at the Delhi School of Economics, University of Delhi, and National Fellow of the Indian Council of Social Science Research, New Delhi, India. Felicitated with the Lifetime Achievement Award by the Indian Sociological Society in 2009, he has also been the recipient of the Swami Pranavananda Award from the University Grants Commission, and the Distinguished Service Award from the University of Delhi. He has held fellowships at the University of Chicago; the Centre for Advanced Study in the Behavioural Sciences, Stanford; the Institute of Development Studies, Sussex, UK; and the University of New England, Australia. He has authored and edited many books, including The Household Dimension of the Family in India (1973); Division and Hierarchy (co-authored with I.P. Desai (1988); The Family in India: Critical Essays (1998); Exploring India's Rural Past (2002); The Writings of A. M. Shah: the Household and Family in India (an omnibus, 2014); and Sociology and History (2017). He has contributed extensively to academic journals and symposia, including ten articles in Gujarati. He has been honoured with a festschrift, Understanding Indian Society: Past and Present (2010), edited by B.S. Baviskar and Tulsi Patel.