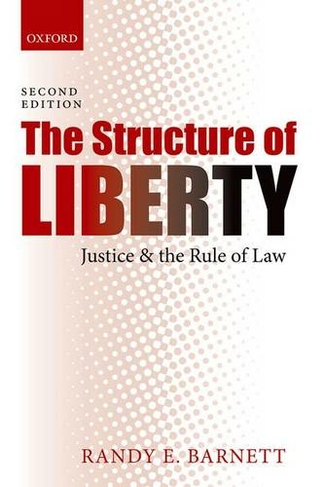 The Structure of Liberty: Justice and the Rule of Law (2nd Revised edition)

Also available on eBook for £20.39. Click here to purchase from Rakuten Kobo

In this book, legal scholar Randy Barnett elaborates and defends the fundamental premise of the Declaration of Independence: that all persons have a natural right to pursue happiness so long as they respect the equal rights of others, and that governments are only justly established to secure these rights. Drawing upon insights from philosophy, economics, political theory, and law, Barnett explains why, when people pursue happiness while living in society with each other, they confront the pervasive social problems of knowledge, interest and power. These problems are best dealt with by ensuring the liberty of the people to pursue their own ends, but this liberty is distinguished from "license" by certain fundamental rights and procedures associated with the classical liberal conception of "justice" and "the rule of law." He then outlines the constitutional framework that is needed to put these principles into practice. In a new Afterword to this second edition, Barnett elaborates on this thesis by responding to several important criticisms of the original work. He then explains how this "libertarian" approach is more modest than either the "social justice" theories of the left or the "legal moralism" of the right.

Randy E. Barnett is the Carmack Waterhouse Professor of Legal Theory at the Georgetown University Law Center, where he directs the Georgetown Center for the Constitution and teaches constitutional law and contracts. He has been a visiting professor at Harvard Law School, the University of Pennsylvania, and Northwestern. In 2008, he was awarded a Guggenheim Fellowship in Constitutional Studies. His publications include more than one hundred articles and reviews, aswell as ten books. After graduating from Northwestern University and Harvard Law School, he tried many felony cases as a prosecutor in the Cook County States' Attorney's Office in Chicago. In 2004, he argued the medical marijuana case of Gonzalez v. Raich before the U.S. Supreme Court. In 2011-12 herepresented the National Federation of Independent Business in its constitutional challenge to the Affordable Care Act.