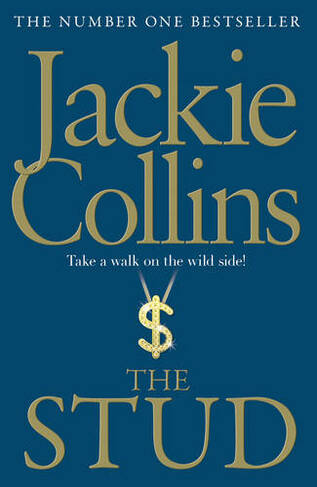 By Jackie Collins (Author)
Paperback
https://www.whsmith.co.uk/products/the-stud/jackie-collins/paperback/9781849836463-12-000.html £8.19 rrp £9.99 Save £1.80 (18%)
GBP
Availability
In Stock
Free Delivery Available When You Spend £25 Or More
Details
Spend £25 On Products To Receive Free Standard Delivery To Your Home Or Free Next Working Day Click And Collect To Store

London, 1969. The hottest, hippest, wildest domain of hedonists and pleasure-seekers, where swingers swarm the clubs and discos in a high-stakes quest to live for the moment. At the centre of this decadent scene, one man plays all the angles, never missing a chance to score with the beautiful women who desire him - and walks the line between ecstasy and overload. Now the woman he wants the most knows his number - and may just call his bluff. EU Toy Safety Directive - No warning

There have been many imitators but only ever one Jackie Collins. The iconic British author was called 'the definition of a class act' by Graham Norton and a 'smart, talented and gorgeous woman who paved the road for many of us' by Sandra Bullock. With millions of her books sold in more than forty countries, and with thirty-one international bestsellers to her credit, she is one of the world's top-selling novelists. Her first novel, The World Is Full of Married Men, was published in 1968 and established Jackie as an author who dared to step where no other female writers had gone before. Jackie was awarded an OBE in 2013 for her services to literature and charity. When accepting the honour she said to the Queen, 'Not bad for a school drop-out' - a revelation capturing her belief that both passion and determination can lead to big dreams coming true. Jackie Collins lived in Beverly Hills where she had a front row seat to the lives she so accurately captured in her compulsive plotlines. She was a creative force, a trailblazer for women in fiction and, in her own words, 'A kick-ass writer!'