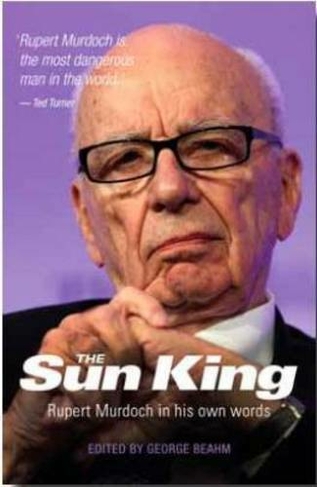 The Sun King Rupert Murdoch in His Own Words

Australian-born billionaire Rupert Murdoch has consolidated his hold over the media and wider political debate in the UK, America and Australia. According to Businessweek, his satellites deliver TV programs in five continents, all but dominating Britain, Italy, and wide swaths of Asia and the MiddleEast. He publishes 175 newspapers and runs BSkyB, Sky Italia, Sky Deutsch and FOXTEL. In the U.S.A he owns the Twentieth Century Fox Studio, Fox Network, and 35 TV stations that reach more than 40% of the USA as well as many other companies. The popular habit of reducing Murdoch to caricature of a media moghul who will stop at nothing ignores the intrigues of his personality in all its contradictory dimensions. Drawn from decades of media coverage this book serves up the best, most thought-provoking insights into who Rupert Murdoch is. More than two hundred quotations that are essential reading and a timeline that includes his apprenticeship under Lord Beaverbrook, doing over tycoon Robert Maxwell, losing a fortune on MySpace, entering the Asian media market and finding a Chinese wife, favouring assorted Prime Ministers and Presidents, to the recent infamous phone-hacking scandal.

"For better or for worse, our company (The News Corporation Ltd.) is a reflection of my thinking, my character, my values." - - Rupert Murdoch