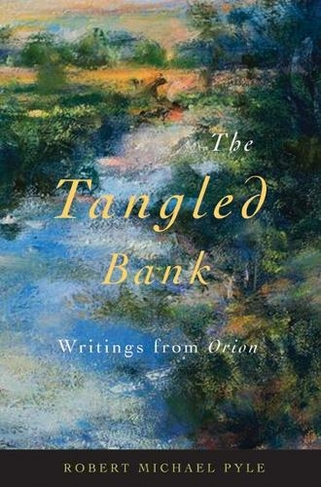 The Tangled Bank: Writings from Orion

"It is interesting to contemplate a tangled bank, clothed with many plants of many kinds, with birds singing on the bushes, with various insects flitting about, and with worms crawling through the damp earth, and to reflect that these elaborately constructed forms, so different from each other, and dependent upon each other in so complex a manner, have all been produced by laws acting around us..." -Charles Darwin, The Origin of Species Robert Michael Pyle's popular "Tangled Bank" column appeared in fifty-two consecutive issues of Orion and Orion Afield magazines over eleven years. Each essay collected in The Tangled Bank explores Charles Darwin's contention that the elements of such a bank, and by extension all the living world, are endlessly interesting and ever evolving. Pyle's thoughtful and concise narratives range in subject from hops and those who love them to independent bookstores to the monarchs of Mexico. In each piece, Pyle refutes "the idea that the world is a boring place," sharing his meticulous observations of the endless and fascinating details of the living earth.

Robert Michael Pyle dwells with his wife, Thea, a botanist and weaver, in an old Swedish farmstead in southwest Washington, USA. His sixteen books include the John Burroughs Medal-winning Wintergreen, The Thunder Tree, Sky Time in Gray's River, and Mariposa Road. A Guggenheim Fellow and founder of The Xerces Society, he is often associated with butterflies, slugs, and Bigfoot.