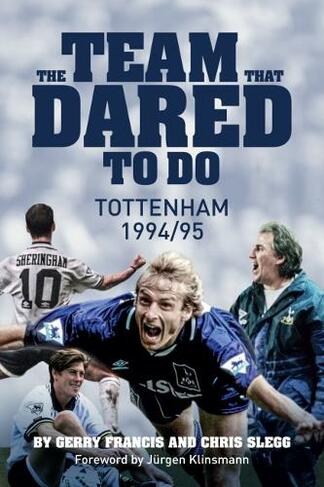 Football isn't about winning trophies, it's about the unforgettable moments that create the stories handed down through generations. Never has that been truer than at Tottenham in 1994/95. In The Team That Dared To Do manager Gerry Francis reveals, for the first time, the diary entries he made in the months after being forced out of QPR and taking on one of the toughest jobs in English football at White Hart Lane. With outspoken chairman Alan Sugar fighting a points deduction and FA Cup ban in the courts, Francis replaced the sacked Ossie Ardiles. In a series of exclusive interviews conducted by BBC sports journalist Chris Slegg we hear from former players including Jurgen Klinsmann, Teddy Sheringham, Darren Anderton, and Sol Campbell about what life was like in the dressing room and on the training ground. From the magic of Klinsmania and Ardiles' audacious attempt to make a success of his 'Famous Five' forward line, to some magnificent performances under Francis, it was a season that had it all. Colour picture section

Gerry Francis captained QPR to their highest-ever finish - second in 1976 - and was handed the England armband at the age of just 23. He is one of the most successful English managers of modern times, leading both QPR (1992/93) and Tottenham (1994/95) to the position of London's top club. Chris Slegg is a BBC sports journalist who has reported on major events including World Cups and Champions League finals. He is a lifelong Tottenham fan.