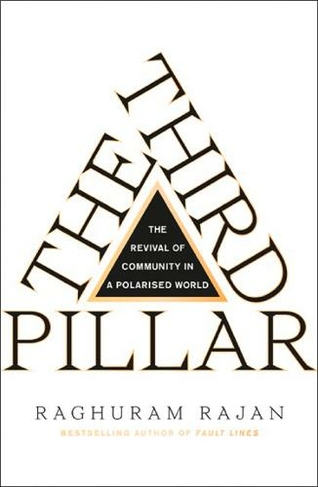 The Third Pillar The Revival of Community in a Polarised World

By Raghuram Rajan (Author)
Hardback
https://www.whsmith.co.uk/products/the-third-pillar-the-revival-of-community-in-a-polarised-world/raghuram-rajan/hardback/9780008276263-12-000.html £16.00 rrp £20.00 Save £4.00 (20%)
GBP
Availability
In Stock
Free Delivery Available When You Spend £25 Or More
Details
Spend £25 On Products To Receive Free Standard Delivery To Your Home Or Free Next Working Day Click And Collect To Store
Share

SHORTLISTED FOR THE FINANCIAL TIMES AND MCKINSEY BUSINESS BOOK OF THE YEAR AWARD 2019 From one of the most important economic thinkers of our time, a brilliant and far-seeing analysis of the current populist backlash against globalization and how revitalising community can save liberal market democracy. Raghuram Rajan, author of the 2010 FT & Goldman-Sachs Book of the Year Fault Lines, has an unparalleled vantage point onto the social and economic consequences of globalization and their ultimate effect on politics and society. In The Third Pillar he offers up a magnificent big-picture framework for understanding how three key forces - the economy, society, and the state - interact, why things begin to break down, and how we can find our way back to a more secure and stable plane. The `third pillar' of the title is society. Economists all too often understand their field as the relationship between the market and government, and leave social issues for other people. That's not just myopic, Rajan argues; it's dangerous. All economics is actually socioeconomics - all markets are embedded in a web of human relations, values and norms. As he shows, throughout history, technological innovations have ripped the market out of old webs and led to violent backlashes, and to what we now call populism. Eventually, a new equilibrium is reached, but it can be ugly and messy, especially if done wrong. Right now, we're doing it wrong. As markets scale up, government scales up with it, concentrating economic and political power in flourishing central hubs and leaving the periphery to decompose, figuratively and even literally. Instead, Rajan offers a way to rethink the relationship between the market and civil society and argues for a return to strengthening and empowering local communities as an antidote to growing despair and unrest. The Third Pillar is a masterpiece of explication, a book that will be a classic of its kind for its offering of a wise, authoritative and humane explanation of the forces that have wrought such a sea change in our lives. His ultimate argument that decision-making has to be watered at the grass roots or our democracy will continue to wither is sure to be both provocative and agenda-setting across the world.

RAGHURAM RAJAN is the Katherine Dusak Miller Distinguished Service Professor of Finance at the Booth School of Business at the University of Chicago. He was the Governor of the Reserve Bank of India between 2013 and 2016, and also served as Vice-Chairman of the Board of the Bank for International Settlements between 2015 and 2016. Dr. Rajan was the Chief Economist and Director of Research at the International Monetary Fund from 2003 to 2006. Dr. Rajan was the President of the American Finance Association in 2011 and is a member of the American Academy of Arts and Sciences and the Group of Thirty. In 2003, the American Finance Association awarded Dr. Rajan the inaugural Fischer Black Prize for the best finance researcher under the age of 40. The other awards he has received include the Deutsche Bank Prize for Financial Economics in 2013, Euromoney magazine's Central Banker of the Year Award 2014 and The Banker magazine's Global Central Banker of the Year award in 2016. In that year, Time magazine chose Dr. Rajan as one of the 100 most influential people in the world. Dr. Rajan is the co-author with Luigi Zingales of Saving Capitalism from the Capitalists (2003), and the author of Fault Lines: How Hidden Fractures Still Threaten the World Economy, for which he was awarded the Financial Times Goldman Sachs prize for best business book in 2010.