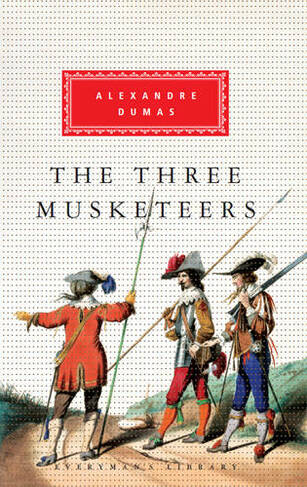 THE THREE MUSKETEERS has proved enduringly popular for more than a century and a half. Inspiration for many a movie and TV adaptation, this swashbuckling epic of chivalry, honour and derring-do, set in France during the 1620s, is satisfyingly peopled with romantic heroes, unattainable heroines, kings, queens, cavaliers and criminals, and contains in abundance adventure, espionage, conspiracy, murder, vengeance, love, scandal and suspense. Taking as its starting point the memoirs of the historical Comte d'Artagnan, Dumas's imagination transforms the bit-players of history into larger-than-life characters: d'Artagnan himself, the impetuous young man in pursuit of glory but ever ready to respond to an insult; the beguilingly evil seductress 'Milady' (entirely his own creation) and of course the Three Musketeers of the title, Athos, Porthos and Aramis, whose motto 'all for one, one for all' has come to epitomize devoted friendship. Interwoven amongst them are vivid fictionalized portraits of major historical figures, amongst them the powerful and devious Cardinal Richelieu, the weak and ineffectual Louis XIII and Anne of Austria, his unhappy Spanish queen. Throw in some stolen diamonds, masked balls, purloined letters, a crumbling medieval prison and a great deal of sword-fighting together with a gripping plot, tremendous narrative drive and a hint of discreet humour, and you have a book totally impossible to put down.

Alexandre Dumas was a French playwright, historian and prolific novelist, penning a string of successful books including The Three Musketeers (1844), The Count of Monte Cristo (1845), and Twenty Years After(1845). His novels have been translated into a hundred different languages and inspired over two hundred films. In his day Dumas was as famous for his financial irresponsibility and flamboyant lifestyle as for his writing. Dumas died in 1870.