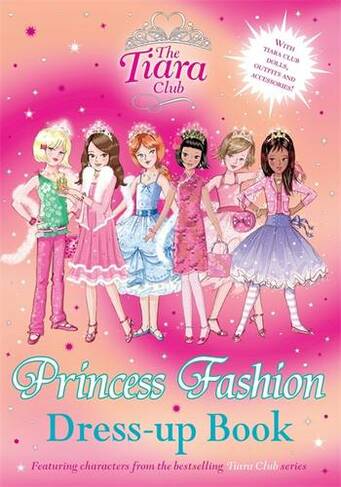 By Vivian French (Author), Sarah Gibb (Illustrator)
Paperback
https://www.whsmith.co.uk/products/the-tiara-club-princess-fashion-dressup-book/vivian-french/sarah-gibb/paperback/9781846168963-01-000.html £3.99
GBP
Availability
Currently unavailable. We don't know when or if this item will be back in stock
Free Saver Delivery on orders over £20
Details
FREE SHIPPING over £20 for Saver Delivery
Share

Children can dress Princess Charlotte and her friends from the Princess Academy for the royal garden party, the ball and other princess parties, with dazzling gowns and beautiful tiaras. This fabulous princess activity book includes 6 princess dolls and lots of press-out party outfits and accessories to mix and match.

Vivian is a writer of both books and plays; she has written more than 250 children's books, including the very successful Tiara Club series, and is consistently one of the top 30 most borrowed authors from UK libraries. She has had plays performed both in London and throughout Scotland; her audiences include young adults as well as children. She has won many awards for her books, and is regularly invited to festivals including Cheltenham and the Edinburgh International Book Festival. (2012 Guest selector for the children's programme.) Vivian teaches part time at Edinburgh College of Art, and is one of the two founding members of the PictureHooks programme supporting Scottish illustrators. She is married with four grown up daughters and three grandchildren, and lives in Edinburgh. She'd like a cat, but lives up 66 steps and has no garden ... maybe one day. Her favourite book is an empty notebook.Since 1990, Vivian French has published more than 100 books for children of all ages. She has been a reviewer and has worked in the theatre - she is also well-known as a playwright. Among her most popular books are the Tiara Club titles for Hachette. Married with four grown-up daughters, she now lives in Edinburgh.Visit her website at www.vivianfrench.com. Sarah Gibb studied at Central St Martin's College of Art and the University of Brighton. Her illustrations have appeared in publications all over the world, including Vogue, Elle and Time Magazine. Sarah has illustrated many books for children, including the highly acclaimed The Princess Who Had No Kingdom, written by Ursula Jones. She lives in London with her husband and two young children.Sarah Gibb trained at St Martin's and then at Brighton College of Art. She is currently working on jackets for all the 'Adrian Mole' books and her distinctive work can currently be seen on posters for the 'Nanny Diaries'. She is much in demand for her designs for book jackets and has published some very successful fairy books for children as well as illustrating fiction.