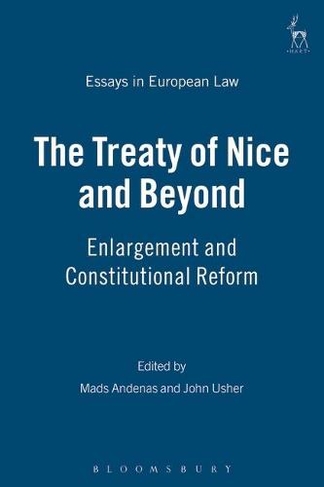 The Treaty of Nice and Beyond Enlargement and Constitutional Reform 1

Designed to succeed previous books on the Maastricht and Amsterdam treaties,this new work includes contributions from leading EU lawyers assessing the Nice Treaty and the Post-Nice process, which is rapidly developing in the lead-up to the next Intergovernmental conference. The book's central theme is the discussion of a European Constitution and European Constitutionalism. The new constitutional balance after institutional reform, the Luxembourg courts after Nice, the future of the three pillar Treaty structure and the Human Rights charter are the other main topics. Among the contributors are the editors, Professor Stephen Weatherill (Oxford), Professor Noreen Burrows (Glasgow), Professor Jurgen Schwarze (Freiburg), Professor Paul Craig (Oxford), Professor Jo Shaw (Manchester) Steve Peers (Essex) Professor Piet Eeckhout (King's College, London) and Professor Alan Dashwood (Cambridge). black & white illustrations