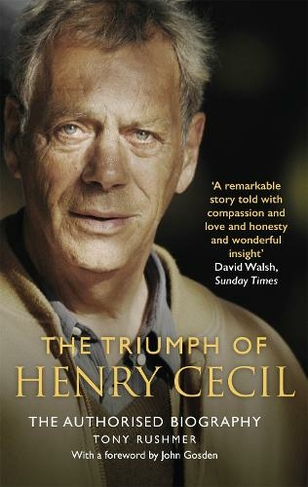 The Triumph of Henry Cecil: The Authorised Biography

'A wonderfully insightful, detailed and emotional biography of the legendary trainer's later years' Racing Post '[Cecil's] is a remarkable story and it has now been told with compassion, love, honesty and wonderful insight by Tony Rushmer' David Walsh, Sunday Times With a foreword by John Gosden When Henry Cecil sent out just 12 winners in 2005 it seemed as if the 10-time champion racehorse trainer's career was in terminal decline. The masterly touch that he'd shown through the glory-days of the two previous decades appeared to have deserted him after a series of painful professional and personal blows, including the death of his twin brother David. When Cecil was diagnosed with cancer in June 2006, it would have been enough to break many a man. But behind the scenes, the master of Warren Place in Newmarket was determined not to be labelled - in his words - a 'has-been'. Showing an iron resolve to fight for his professional reputation as well as his life, Cecil staged one of the great sporting comebacks. It was a story that captured the imagination of the racing public and beyond, peaking with his supreme handling of the unbeaten champion Frankel. Cecil's astonishing revival was witnessed in close-up by Tony Rushmer. The sports journalist became a trusted stable insider after being engaged in spring 2006 to help with the trainer's website and PR. He would remain part of the team right up until Cecil died in June 2013. Rushmer's unique access over seven years - in which he saw Cecil at the best and worst of times - allows him to provide a fresh perspective on an incredible part of the trainer's career. He is helped by many of those who were closest to the story, having interviewed numerous people during his extensive research. Containing fascinating detail and a wealth of new material, The Triumph of Henry Cecil shows how Cecil emerged from his slump, displayed relentless strength in the face of a cruel disease and trained the magnificent Frankel - as brilliant a racehorse as the sport has ever known. 16pp. colour plate section

Tony Rushmer has been a journalist for almost 25 years, covering a wide range of sports for national newspapers and magazines. Having established his own PR business in 2005 he has been directly involved in the racing industry, working for clients such as Newmarket Racecourses, York Racecourse, Sir Henry Cecil and Juddmonte Farms. He lives in Ely, a 25-minute minute drive from Newmarket - the historic home of horseracing.