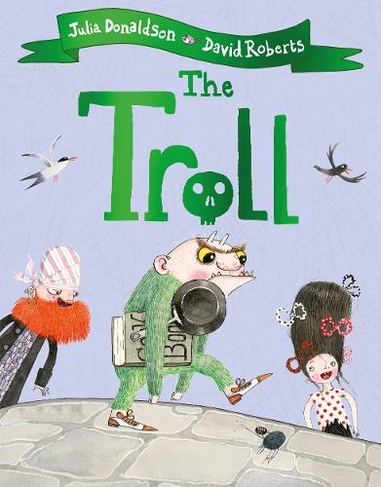 A laugh-out-loud pirate adventure from the stellar picture-book partnership of Julia Donaldson and David Roberts. The Troll longs for a juicy goat to eat - but he's stuck with boring old fish for supper. Bother! Meanwhile, Hank Chief and his pirate crew love fish, but without a decent recipe their slimy, soggy dinner is even worse. If only they could find their buried treasure and pay for a ship's cook . . . but it seems they've sailed to the wrong island. Again. Watch the fun unfold as two very different worlds collide in The Troll, a gloriously comic story from Julia Donaldson and David Roberts, the creators of the highly acclaimed Tyrannosaurus Drip. Enjoy the other stories by Julia Donaldson and David Roberts: Tyrannosaurus Drip, Jack and the Flumflum Tree, The Flying Bath and The Cook and the King.

Julia Donaldson is the author of some of the world's best-loved children's books, including modern classics The Gruffalo and The Gruffalo's Child, which together have sold over 17 million copies worldwide, and the hugely successful What the Ladybird Heard adventures. Julia also writes fiction, including the Princess Mirror-Belle books illustrated by Lydia Monks, as well as poems, plays and songs - and her brilliant live shows are always in demand. She was Children's Laureate 2011-13 and has been honoured with a CBE for Services to Literature. Julia and her husband Malcolm divide their time between West Sussex and Edinburgh.David Roberts is an award-winning illustrator who has earned great acclaim for his distinctive illustrations. Born in Liverpool, he has a degree in fashion design, but he always felt his true calling was in children's book illustration and now pursues that dream from his flat in London. His previous work includes collaborations with his sister Lynn on retellings of several classic fairy stories, including Little Red which was shortlisted for the CILIP Kate Greenaway Medal. David is the illustrator of the New York Times bestselling picture books Rosie Revere, Engineer and Ada Twist, Scientist, written by Andrea Beaty. David has also collaborated with Julia Donaldson on several Macmillan picture books, including Jack and the Flumflum Tree, The Troll and The Flying Bath.