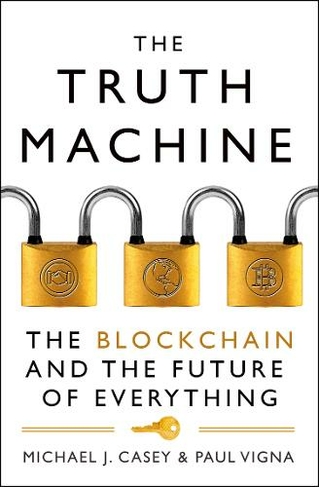 The Truth Machine: The Blockchain and the Future of Everything

From the authors of the fascinating The Age of Cryptocurrency, comes the definitive work on the Internet's next big thing: the blockchain. Many of the `legacy systems' once designed to make our lives easier and our economy more efficient are no longer up to the task; big banks have grown more entrenched, privacy exists only until the next hack, and credit card fraud has become a fact of life. However, there is a way past all this-a new kind of operating system with the potential to revolutionise our economy: the blockchain. In The Truth Machine, Michael J. Casey and Paul Vigna demystify the blockchain and explain why it can restore personal control over our data, assets, and identities; grant billions of excluded people access to the global economy; and shift the balance of power to revive society's faith in itself. They reveal the empowerment possible when self-interested middlemen give way to the transparency of the blockchain, while highlighting the job losses, assertion of special interests, and threat to social cohesion that will accompany this shift. With a balanced perspective, Casey and Vigna show why we all must care about the path that blockchain technology takes-moving humanity forward, not backward.

Michael J. Casey writes for The Wall Street Journal, covering global finance in his `Horizons' column. He is a frequent contributor to the Journal's MoneyBeat blog and co-authors the daily `BitBeat' with Paul Vigna. He is the host of the book-themed video series WSJ Afterword and a frequent guest on and host of The News Hub and MoneyBeat. His podcast on world economic affairs is forthcoming. Casey has written for publications such as Foreign Policy, The Washington Post, and The Financial Times. He is the author of two books: Che's Afterlife: The Legacy of an Image (2009) and The Unfair Trade: How Our Broken Financial System Destroys the Middle Class (2012). Paul Vigna is a markets reporter for The Wall Street Journal, covering equities and the economy. He is a columnist and anchor for MoneyBeat. Previously a writer and editor of the `MarketTalk' column in DowJones Newswires, he has been a guest on the FoxBusiness Network, CNN, the BBC, and the John Batchelor radio show. He has been interviewed by Bitcoin magazine and appeared on the Bitcoins & Gravy podcast, and collectively obtains 20 years of journalism experience.