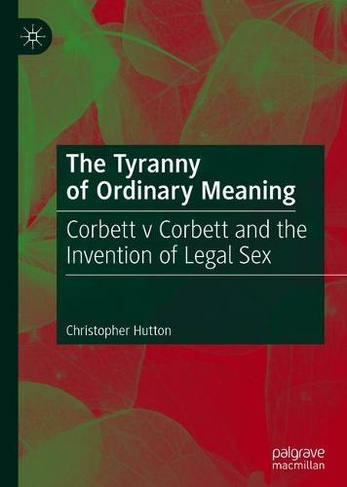 The Tyranny of Ordinary Meaning Corbett v Corbett and the Invention of Legal Sex 1st ed. 2019

This book offers an in-depth analysis of the case of Corbett v Corbett, a landmark in terms of law's engagement with sexual identity, marriage, and transgender rights. The judgement was handed down in 1970, but the decision has shaped decades of debate about the law's control and recognition of non-normative gender identities. The decision in this case - that the marriage between the Hon. Arthur Corbett and April Ashley was void on the grounds that April Ashley had been born male - has been profoundly influential across the common law world, and came as a dramatic and intolerant intervention in developing discussions about the relationships between medicine, law, questions of sex versus gender, and personal identity. The case raises fundamental questions concerning law in its historical and intellectual context, in particular relating to the centrality of ordinary language for legal interpretation, and this book will be of interest to students and scholars of language and law, legal history, gender and sexuality. VIII, 187 p.

Christopher Hutton is Chair Professor in the School of English at the University of Hong Kong. His research concerns the history of linguistics within the history of ideas, in particular the relationship between linguistics and race theory, and linguistics and fascism. In the last decade he has been working on the politics of language and interpretation in the context of the law, focusing on the classification of objects, acts, animals and people.