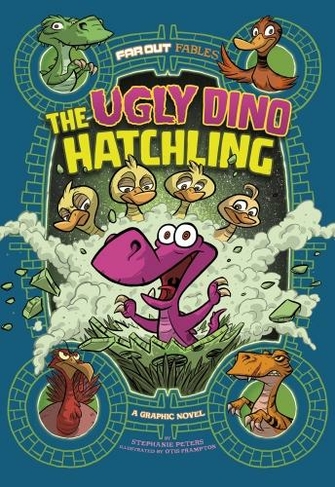 There once was an ugly duckling ... who was actually a baby dinosaur! A dino egg tumbled through a time vortex into a duck nest, but it's clear the hatchling Rex doesn't fit in with his duckling family. So the lost dino leaves the nest on a quest to find his place among the barnyard animals. Will Rex ever find where he truly belongs? In this ebook Far Out Fables adventure, Hans Christian Andersen's "The Ugly Duckling" receives a playful, modern twist. Experience a classic fable like never before in this full-colour graphic novel retelling for kids.

Stephanie True Peters has been writing books for young readers for more than 25 years. Among her most recent titles are Sleeping Beauty: Magic Master and Johnny Slimeseed, both for Capstone's Far-Out Fairy Tale/Folk Tale series. An avid reader, workout enthusiast, and beach wanderer, Stephanie enjoys spending time with her children, Jackson and Chloe, her husband Dan, and the family's two cats and two rabbits. She lives and works in Mansfield, Massachusetts. Otis Frampton is a comic book writer & illustrator. He is also one of the character and background artists on the popular animated web series "How It Should Have Ended." His comic book series Oddly Normal is published by Image Comics.