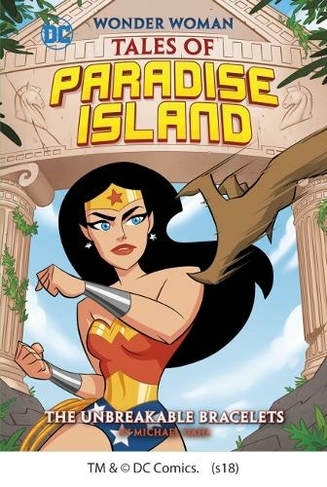 Welcome to Paradise Island, the secret home of Wonder Woman! Hundreds of weapons and trophies fill the halls of the island's palace. Each one tells a story of adventure, danger and bravery. This is the tale of the silver bracelets that saved Wonder Woman from Cheetah!

Michael Dahl is the prolific author of the bestselling Goodnight, Baseball picture book and more than 200 other books for children and young adults. He has won the AEP Distinguished Achievement Award three times for his nonfiction, a Teacher's Choice award from Learning magazine, and a Seal of Excellence from the Creative Child Awards. And he has won awards for his board books for the earliest learners, Duck Goes Potty and Bear Says "Thank You!" Dahl has written and edited numerous graphic novels for younger readers, authored the Library of Doom adventure series, the Dragonblood books, Trollhunters, and the Hocus Pocus Hotel mystery/comedy series. Dahl has spoken at schools, libraries, and conferences across the US and the UK, including ALA, AASL, IRA, and Renaissance Learning. He currently lives in Minneapolis, Minnesota in a haunted house. Omar lives in Monterrey, Mexico. He has always been crazy for illustration, constantly on the lookout for awesome things to draw. In his free time, he watches lots of movies, reads fantasy and sci-fi books, and draws! Omar has worked for Marvel, DC, IDW, Capstone and several other publishing companies.