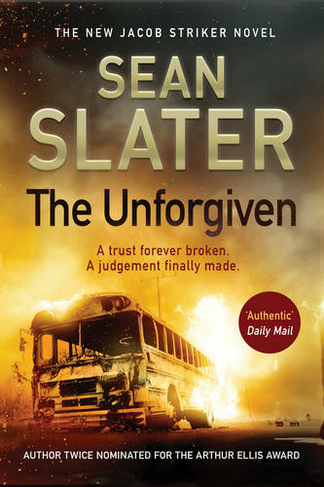 By Sean Slater (Author)
Paperback
https://www.whsmith.co.uk/products/the-unforgiven-abandoned/sean-slater/paperback/9781471101403-12-000.html £6.55 rrp £7.99 Save £1.44 (18%)
GBP
Availability
In Stock
Free Delivery Available When You Spend £15 Or More
Details
Spend £15 On Eligible Products To Receive Free Standard Delivery To You Home Or Free Next Working Day Click And Collect To Store
Share

It is late at night when Detective Jacob Striker receives a call to investigate a disturbance at a bus depot in downtown Vancouver. On arrival, he discovers a bus in flames and the fire department battling to control the blaze. When they finally put the fire out, Striker makes a terrifying discovery. Inside is the body of a woman he once worked with, a police officer from the force. It looks as though she has been lured in and ambushed. Striker vows to avenge the death of his friend and colleague by bringing her murderer to justice, and to start, he'll have to take over the file she was investigating that brought her to this part of the city. But the more Striker tries to look into the case, the more he finds doors closed in his face - both among the police and outside. It soon becomes apparent that Jazz's investigations were upsetting some influential people, and Striker is putting himself in grave danger as he battles through the layers of intrigue and lies surrounding the case. EU Toy Safety Directive - No warning

Sean Slater is the pseudonym for Vancouver Police Officer Sean Sommerville. As a police officer, Sommerville works in Canada's poorest slum, the Downtown East Side - an area rife with poverty, mental illness, drug use, prostitution, and gang warfare. He has investigated everything from frauds and extortions to homicides. Sommerville has written numerous columns and editorials for the city newspaper. His work has been nominated for the Rupert Hughes Prose Award, and he was the grand-prize winner of the Sunday Serial Thriller contest, which was co-written by Daniel Kalla and published in the Vancouver Province. When not patrolling the 'Skids', Sommerville is working hard on Stone Cold, the second novel in the Jacob Striker series.