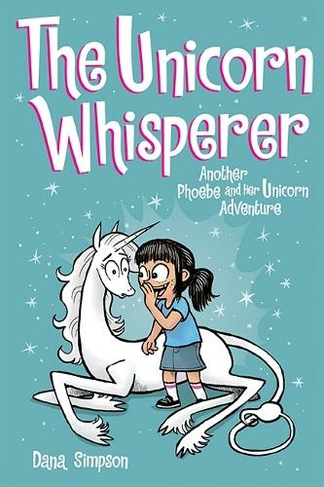 By Dana Simpson (Author)
Paperback
https://www.whsmith.co.uk/products/the-unicorn-whisperer-phoebe-and-her-unicorn-series-book-10-another-phoebe-and-her-unicorn-adventure/dana-simpson/paperback/9781524851965-12-000.html £5.94 rrp £6.99 Save £1.05 (15%)
GBP
Availability
In Stock
Free Delivery Available When You Spend £25 Or More
Details
Spend £25 on eligible products to receive free standard delivery to home or free next working day click and collect to store
Share

New York Times bestselling series! Dana Simpson takes readers of all ages back to the magical world of Phoebe and Her Unicorn in this all-new comics collection. What could be more magical than being best friends with a unicorn? For 9-year-old Phoebe Howell and her sparkling companion, Marigold Heavenly Nostrils, every day is an adventure. But it isn't always easy. In this latest installation of Dana Simpson's award-winning Phoebe and Her Unicorn series, Phoebe navigates the challenges of school life while being pulled into plenty of curious and entertaining adventures with her vain but endearing best friend.

Dana Claire Simpson grew up in Gig Harbor, Washington, drawing the entire time. She eventually graduated from The Evergreen State College, despite having spent all her time drawing, and not always for credit.From 1998 to 2008, she drew the internet comic strip Ozy and Millie. After winning the Amazon-sponsored Comic Strip Superstar Contest in 2009, Andrews McMeel Syndication signed her to a development deal for Heavenly Nostrils, which was later renamed Phoebe and Her Unicorn.She currently lives in Santa Barbara, California, with her tech genius spouse and her fairly stupid cat.