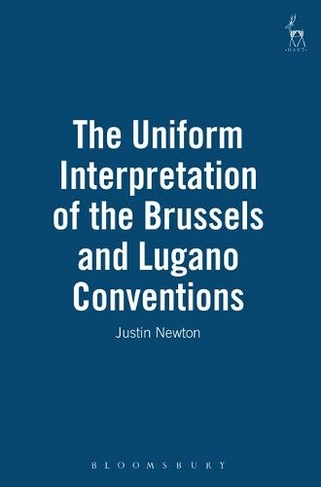 The Uniform Interpretation of the Brussels and Lugano Conventions

This work is a comparative examination of the uniform application of the Brussels and Lugano Conventions by courts in the UK,France, Germany, and various other European countries. It analyses evidence of inconsistent or divergent interpretations of certain contentious articles of these Conventions and the experience of litigation under them in other (French- and German-speaking) jurisdictions. The book acts as a unique repository of information and offers a detailed examination of both academic commentary and case-law from the Convention jurisdictions together with a critical appraisal of the jurisprudence of the European Court of Justice. It thus encompasses, in an accessible English form, the laws of Continental Europe, which would otherwise be out of the reach for lawyers. At appropriate points, it provides a bridge to the new regime under the Brussels I Regulation 44/2001 and Council Service Regulation 1348/2000, and the reforms underway in the draft Hague Worldwide Judgments Convention. The book will be invaluable to practitioners acting for clients on a pan-European basis who may need to know the likelihood of their clients' being sued under the Conventions in other Contracting States, their opponents' potential strategies before their own national courts, and the possible tactics that should be employed to plan for, avoid, or even block such manoeuvring. Of eventual concern to practitioners is the availability, or not, of a sympathetic recognition and enforcement regime in other Contracting States. The work highlights certain pitfalls in this regard, and most likely hurdles that certain Contracting State judgment debtors may place in the way of recognition and enforcement, and the chances of receptive or hostile treatment before certain Contracting State courts.

Justin J Newton has a degree in German,and undergraduate and masters degrees in law. He completed his Oxford D.Phil in law in 2001.