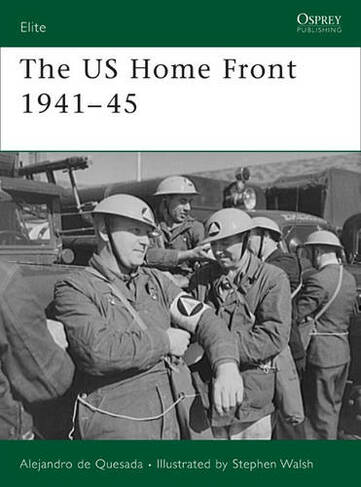 Osprey's examination of the situation on the United States home front during World War II (1939-1945). The outbreak of World War II in Europe in 1939 led to cautious attempts to raise volunteer organizations among American men and women, to back the armed forces in the event of the USA becoming directly involved in the conflict. The attack on Pearl Harbor caused a huge surge of patriotic response, and voluntary enlistment in a wide range of auxiliary and civilian support services, as well as the armed forces, swelled vastly. Looking first at the background and general character of wartime life in the States, Alejandro de Quesada covers the main services, providing an interesting comparison with the conditions on the British Home Front and the experiences of other countries caught up in the war, examining organizations from the Red Cross to the Coast Guard. Full-color artwork reconstructions of the uniforms of over a dozen services are a unique feature of this book. Illustrations (some col.)