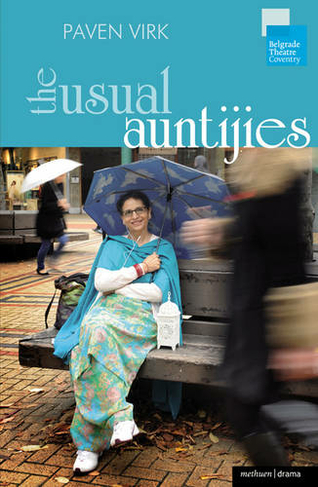 Aunti-ji - noun. a term sometimes used to address women older than oneself. Ji is traditionally used after someone's name to show respect, mainly by the communities of the Indian sub-continent. Somewhere in the city live three elderly, South Asian auntijies who have found themselves together in a refuge for abused women, empty of memories and bereft of their families and friends. Nearby, a new Indian bride has arrived in the country only to find herself in a place that she is utterly unprepared for. The Usual Auntijies is a bitter-sweet new comic-drama that visits the lives of four women as they embark on an inspiring, emotional and comic journey to overcome the past abuse and rediscover their sense of life, love and happiness. Exploring ideas of family and the cultural differences that exist between the East and West, the Auntijies struggle with popular Western culture and provide a hybrid cultural context which amusingly sits alongside the women's otherness and past pain. The Usual Auntijies is a celebration of all women of a particular age whose desires and struggles are too often forgotten.

Paven Virk founded the Second Generation Theatre Company at 17. She has been part of the Royal Court Young Writers Programme, the NFTS Screenwriting for Film and TV Course and the Theatre Royal Stratford East Musical Theatre Writing Residency.