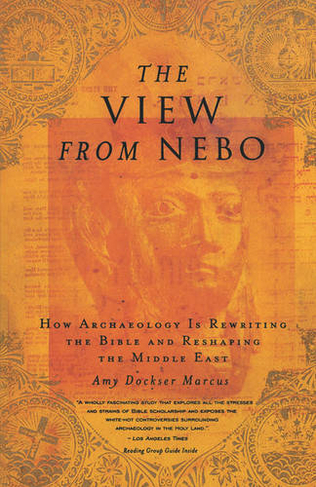 The View from Nebo: How Archaeology Is Rewriting the Bible & Reshaping the ....

The accounts of the Holy Land's history in the Bible have for years been taken for granted. But recently, a body of dramatic discoveries has raised questions about many of the most widely accepted Biblical narratives. Amy Dockser Marcus examines this research, which is changing not only our understanding of Scripture but the face of the Middle East today. Marcus takes the reader on a tour of the Old Testament to reveal startling new discoveries about the history of that time, and reminds us that the problems that plague the modern Middle East have their roots in Biblical times -- and may find their solutions there, as well. -- Marcus's extensive research included visits to digs in Egypt, Jordan, Israel, and the West Bank, where she interviewed archaelogists, Bible scholars, government officials, and historians. -- Controversial new revelations include that Egyptian pyramids were not built by slaves, and probably not even by Israelites, and that the United Monarchy of David and Solomon was in fact separate states. -- Marcus presents a new solution to the problems in the Middle East.