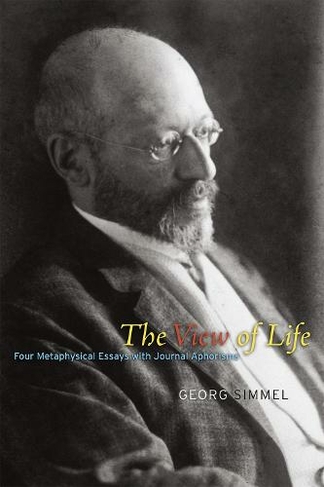 The View of Life: Four Metaphysical Essays with Journal Aphorisms

Published in 1918, The View of Life is Georg Simmel's final work. Famously deemed "the brightest man in Europe" by George Santayana, Simmel addressed diverse topics across his essayistic writings, which influenced scholars in aesthetics, epistemology, and sociology. Nevertheless, certain core issues emerged over the course of his career - the genesis, structure, and transcendence of social and cultural forms, and the nature and conditions of authentic individuality, including the role of mindfulness regarding mortality. Composed not long before his death, The View of Life was, Simmel wrote, his "testament," a capstone work of profound metaphysical inquiry intended to formulate his conception of life in its entirety. Now Anglophone readers can at last read in full the work that shaped the argument of Heidegger's Being and Time and whose extraordinary impact on European intellectual life between the wars was extolled by Jurgen Habermas. Presented alongside these seminal essays are aphoristic fragments from Simmel's last journal, providing a beguiling look into the mind of one of the twentieth century's greatest thinkers. 1 table