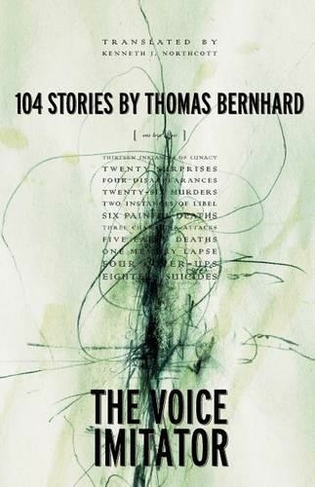 Also available on eBook for £7.43. Click here to purchase from Rakuten Kobo

In "The Voice Imitator," translated by Kenneth Northcott, Bernhard gives us one of his most darkly comic works. A series of parable-like anecdotes -- some drawn from newspaper reports, some from conversation, some from hearsay -- this satire is both subtle and acerbic. What initially appear to be quaint little stories indict the sterility and callousness of modern life, not just in urban centers but everywhere. Bernhard presents an ordinary world careening into absurdity and disaster. Politicians, professionals, tourists, civil servants -- the usual victims of Bernhard's inspired misanthropy -- succumb one after another to madness, mishap, or suicide.

Thomas Bernhard (1931-89) grew up in Salzburg and Vienna, where he studied music. In 1957 he began a second career as a playwright, poet, and novelist. He went on to win many of the most prestigious literary prizes of Europe (including the Austrian State Prize, the Bremen and Bruchner prizes, and Le Prix Seguier), became one of the most widely admired writers of his generation, and insisted at his death that none of his works be published in Austria for seventy years, a provision later repealed by his half-brother. Translator, scholar, and stage actor Kenneth J. Northcott (1922-2019) was professor emeritus of Germanic Studies at the University of Chicago and the translator of numerous German-language books for the University of Chicago Press. He is especially known for his inspired translations of works by the Austrian writer Thomas Bernhard, all of which remain in print: The Voice Imitator, Walking, Three Novellas, and Histrionics: Three Plays.