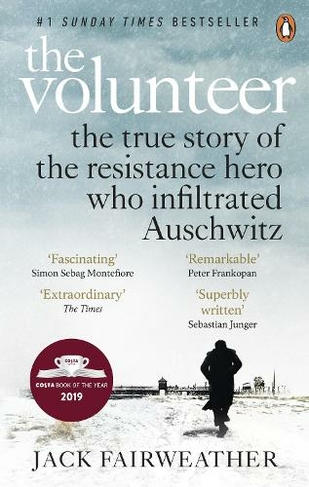 The Volunteer: The True Story of the Resistance Hero who Infiltrated Auschwitz - Costa Book of the Year 2019

In this gripping true story from the Second World War, Polish resistance fighter Witold Pilecki purposefully allows himself to be detained at the notorious Nazi concentration camp Auschwitz in order to gain information on the enemy. During his two and a half years in the camp Witold forged a secret army to smuggle evidence out of the camp, sabotaged facilities, assassinated Nazi officers, and spread news of the Holocaust to the outside world.

Despite his heroism and resilience to uncover the Nazi's terrifying plans and help shape the Allies' response to the Holocaust, Witold's story did not come to light until many decades after his internment. Now in the first major account of his story, Jack Fairweather uses unpublished family papers, newly released archival documents and exclusive interviews with surviving resistance fights to bring Witold's story to life.

Jack Fairweather is a British writer and former war reporter in Iraq and Afghanistan, and the author of A War of Choice, The Good War and The Volunteer. He splits his time between the UK and Vermont.