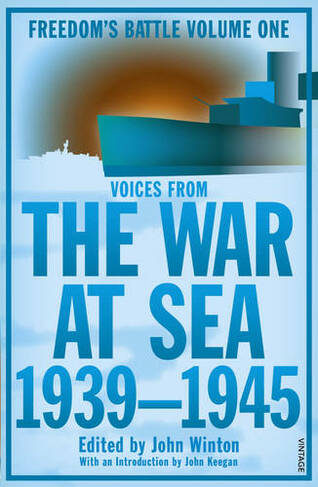 An anthology of personal experience selected and edited by John Winton. The Second World War produced hundreds of actions and incidents at sea which were packed with drama and suspense, and which evoked the greatest heroism. Here is a generous selection of personal experience written by the men and women who were there: in the British and Commonwealth Navies, the Fleet Air Arm, the Merchant Navy, or ashore. Names which have passed into history - Narvik, Dunkirk, the River Plate, the Bismarck, the Scharnhorst, Crete, Anzio, the Battle of the Atlantic, the Russian convoys - all these and many others are reflected in these gripping eyewitness testimonies. This is the first volume in the unique Freedom's Battle trilogy, which provides intensely vivid accounts of war at sea, in the air and on land. Far better than any single narrative, the extracts build up a complete picture of the War as it was experienced by the men and women who actually fought in it. 16 pp b/w photographs

John Winton joined the Royal Navy in 1949 as a cadet and retired in 1963 as a Lieutenant-Commander. He is widely known as a novelist and historian of the sea. His books include the novels A Drowning War and Aircraft Carrier, and works of non-fiction such as Find, Fix and Strike: The Fleet Air Arm at War 1939-45, War in the Pacific: Pearl Harbor to Tokyo Bay, Air Power at Sea 1939-1945, The Death of the 'Scharnhorst', Ultra at Sea and Ultra in the Pacific. He died in 2001.