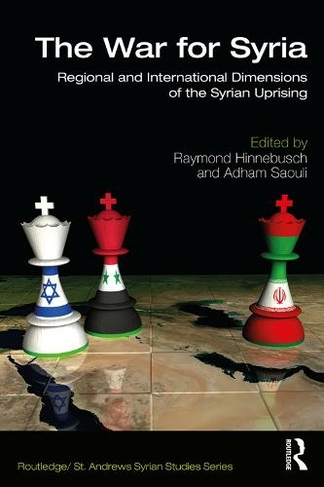 Examining the international dimensions of the Syrian conflict, this book studies external factors relating to the Uprising. It explores the involvement of outside powers and the events' impact both on regional and international level. Syria was widely perceived to be essential to the regional power balance, hence it was a valued prize to be fought over. The book examines the impact of global and regional powers in propelling the conflict in Syria; looks at the motives and strategies of the key regional and international actors (Hizbollah, Palestinians, Iran, Qatar, Saudi Arabia, US, Russia, EU); and analyses the impact of the Syrian conflict on key relations between regional states (Turkey-Syria, Turkey-Iran, Iraq-Syria). Finally, several chapters treat the impact on Syria of international sanctions and the "Responsibility to Protect" doctrine. This book follows on to The Syrian Uprising: Domestic Origins and Early Trajectory, edited by Raymond Hinnebusch and Omar Imady (2018). Subsequent volumes will examine the later evolution of the conflict. Taking an innovative and interdisciplinary approach that seeks to capture the full complexity of the phenomenon, this book contributes significantly to our understanding of the Syrian conflict and will therefore be a valuable resource for anyone studying Middle Eastern Politics. 3 Line drawings, black and white; 2 Tables, black and white; 3 Illustrations, black and white

Raymond Hinnebusch is professor of International Relations and Middle East Politics at the University of St Andrews, Scotland. He is founder and director of the Centre for Syrian Studies. His most recent works on Syria include: Syria: Revolution from Above (2001); Turkey-Syria Relations: Between Enmity and Amity, co-edited with Ozlem Tur (2013); Syria: From Reform to Revolt: Politics and International Relations, co-edited with Tina Zintl (2014); The Syrian Uprising: Domestic Origins and Early Trajectory, co-edited with Omar Imady (2018).Adham Saouli is senior lecturer at the University of St Andrews. He is currently visiting associate professor at the Doha Institute for Graduate Studies. Saouli is the author of Hezbollah: Socialisation and its Tragic Ironies (2019) and The Arab State: Dilemmas of State Formation (2012). His study "Performing the Egyptian Revolution: Origins of Collective Restraint Action," in Political Studies, was nominated for the Harrison Prize (2015).