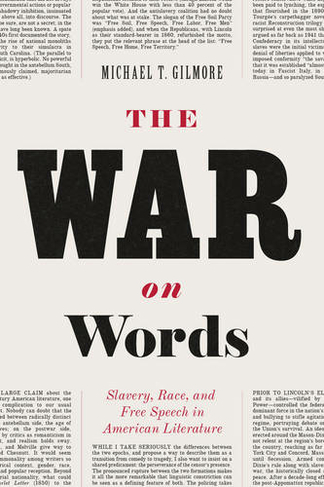 The War on Words Slavery, Race, and Free Speech in American Literature

How did slavery and race affect American literature in the nineteenth century? In this ambitious book, Michael T. Gilmore argues that they were the carriers of linguistic restriction, and writers from Frederick Douglass to Stephen Crane wrestled with the demands for silence and circumspection that accompanied the antebellum fear of disunion and the postwar reconciliation between the North and South. Proposing a radical new interpretation of nineteenth-century American literature, The War on Words examines struggles over permissible and impermissible utterance in works ranging from Thoreau's "Civil Disobedience" to Henry James' The Bostonians. Combining historical knowledge with groundbreaking readings of some of the classic texts of the American past, The War on Words places Lincoln's Cooper Union address in the same constellation as Margaret Fuller's feminism and Thomas Dixon's defense of lynching. Arguing that slavery and race exerted coercive pressure on freedom of expression, Gilmore offers here a transformative study that alters our understanding of nineteenth-century literary culture and its fraught engagement with the right to speak. 1 halftone