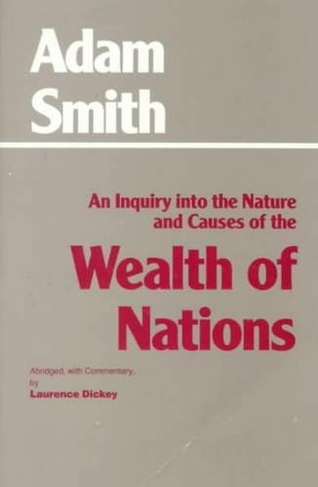 The Wealth of Nations

This thoughtful new abridgment is enriched by the brilliant commentary which accompanies it. In it, Laurence Dickey argues that the Wealth of Nations contains--and conceals--a great deal of how Smith actually thought a commercial society works. Guided by his conviction that the so-called Adam Smith Problem--the relationship between ethics and economics in Smith's thinking--is a core element in the argument of the work itself, Dickey's commentary focuses on the devices Smith uses to ground his economics in broadly ethical and social categories. An unparalleled guide to an often difficult and perplexing work.

Adam Smith was born in a small village in Kirkcaldy, Scotland in 1723. He entered the University of Glasgow at age fourteen, and later attended Balliol College at Oxford. After lecturing for a period, he held several teaching positions at Glasgow University. His greatest achievement was writing The Wealth of Nations (1776), a five-book series that sought to expose the true causes of prosperity, and installed him as the father of contemporary economic thought. He died in Edinburgh on July 19, 1790. Laurence Dickey is Professor of History, University of Wisconsin at Madison.