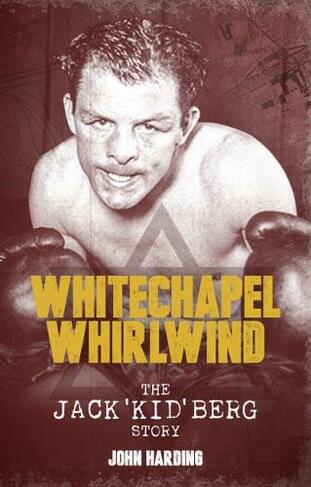 By John Harding (Author)
Paperback
https://www.whsmith.co.uk/products/the-whitechapel-whirlwind-the-jack-kid-berg-story/john-harding/paperback/9781785314438-03-000.html £3.89 rrp £12.99 Save £9.10 (70%)
GBP
Availability
In Stock
Free Delivery Available When You Spend £25 Or More
Details
Spend £25 on eligible products to receive free standard delivery to home or free next working day click and collect to store
Share

Jack Kid Berg dominated boxing in the early 1930s like no other British-born boxer before or since. Born of immigrant Russian-Jewish parents, he grew up in the East End of London, gaining a fearsome reputation for scrapping in the streets of Whitechapel. Berg's American battles with Tony Canzoneri and Kid Chocolate gained him worldwide fame. His 1930 victory over Mushy Callahan made him world junior welterweight champion, and he won the British lightweight title at his first attempt in 1934. Old-timers recalled, 'When you think Berg is going to slow down, he goes faster. He punched so fast he demoralised opponents rather than demolished them. No boxer was bolder and gamer.' The Whitechapel Whirlwind features exclusive interviews with Berg in the years before his death in 1991, and makes deft use of eyewitness accounts, newspaper cartoons, statistics and photos of Jack's 200-plus fights. Never a man to display false modesty, Berg is brutally frank about his wins, his losses, even his love life. Includes separate photo section

John Harding has chronicled the lives of footballers Billy Meredith and Alex James, poet Ralph Hodgson and playwright Shelagh Delaney. He is the author of Lonsdale's Belt: Boxing's Most Coveted Prize; Behind the Glory, the official history of the Professional Footballers' Association; and Living To Play, a study of the off-field lives of professional soccer stars since the 1880s. John has contributed to Boxing News, Blizzard and Time Out.