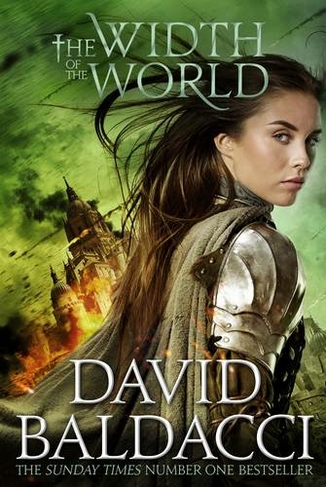 The Width of the World: (Vega Jane)

By David Baldacci (Author)
Paperback
https://www.whsmith.co.uk/products/the-width-of-the-world-vega-jane/paperback/9781509844982-12-000.html £6.55 rrp £7.99 Save £1.44 (18%)
GBP
Availability
In Stock
Free Delivery Available When You Spend £25 Or More
Details
Spend £25 on eligible products to receive free standard delivery to home or free next working day click and collect to store
Share

David Baldacci is back with The Width of the World, the third book in the Vega Jane series which began with his instant #1 global bestseller and award-winning YA fantasy debut The Finisher. This is it. Vega Jane's time. Lied to her whole life, she has broken away from Wormwood, the only home she's ever known, and headed off into the Quag in search of the truth. She battles horrors to fight her way through it, with her best friend, Delph, and her mysterious canine, Harry Two, alongside her. Against all odds, they survive - but arrive into a place that's even worse. Not because deadly beasts roam the streets, but because the people there are enslaved and don't even know it. It's up to Vega, Delph, Harry Two and their new comrade, Petra, to take up the fight against savage and cunning new foe - and their triumph or failure will determine the fate of the whole world.

David Baldacci is a worldwide bestselling writer. He writes books for children and adults and they are published in over forty-five different languages and in more than eighty countries, and with more than 110 million copies in print, he is one of the world's favourite storytellers. The Finisher was his first book for young adults and film rights have been bought, with the producer of Spiderman attached. The Width of the World is the third book in the Vega Jane sequence, following on from The Finisher and The Keeper. David is the co-founder, along with his wife, of the Wish You Well Foundation, a non-profit organization dedicated to eliminating illiteracy across America. David is still a resident of his native Virginia.